The first emergency warning radios, using the DATA FM emergency notification, and selective multi-point messaging radios were created in the late 1990s out of a need to provide demographic and geographic notifications in the event of weather disasters such as tornadoes, tsunamis, and hurricanes.

The first system was built on the Nation Island of Antigua in the Caribbean. (click for map) During an earthquake on Antigua, the Data FM system was the only communication system working on the island for many hours. It was very helpful during this emergency.

The second system was for the city of Atlanta School System. Receivers were installed in every public school in the city of Atlanta.  Access to the system was provided for the Emergency Management director for the Fulton County Emergency Management Agency. On the 12th day of March in 2005, a shooting occurred at the Fulton County Courthouse killing several people. The shooter escaped and his whereabouts were unknown. The message was immediately communicated to the schools directly from the emergency management director, Jim Cook, to lock down the schools. This was done within a matter of a few minutes to all the selected schools in the Fulton County School system.

The next system was a statewide system for the Georgia Department of Public Health, which provided coverage using all signals of the Georgia Public Broadcasting System.  We also utilized a dozen other stations throughout the state for the first full wireless coverage for all the state of Georgia. Receivers were installed in all 159 county Health Departments, District Offices, and Hospital Emergency Rooms throughout the state.

Today there is no wireless system capable of sending data other than FM that provides complete coverage for the geographical area for the state of Georgia.

RDS2 VS OTHER WIRELESS SYSTEMS

The emergency notification systems comprise equipment to be installed at the existing radio station transmitter site.

​For example, with an RDS2 system, it is not necessary to build cell towers, buy transmitter equipment, obtain a broadcasting license, maintain broadcasting towers or equipment, etc. This system not only saves money, but time and maintenance as well.

The Radio Data System (RDS) is a protocol for the distribution of data. RDS allows FM radio broadcasters to send additional information along with the typical stereo audio signal.

Most recently, we have added two other technologies to our basic Data FM system.

The first feature is RDS2, which is a high-speed delivery system using additional subcarriers on the FM broadcasting signal.

The RDS2 system can download to multiple points, a large amount of data (text and graphics) in a matter of seconds. RDS2 is fully compatible with RDS.

The second feature is the ability for each receiver to report back to the sender, to confirm the message was received. 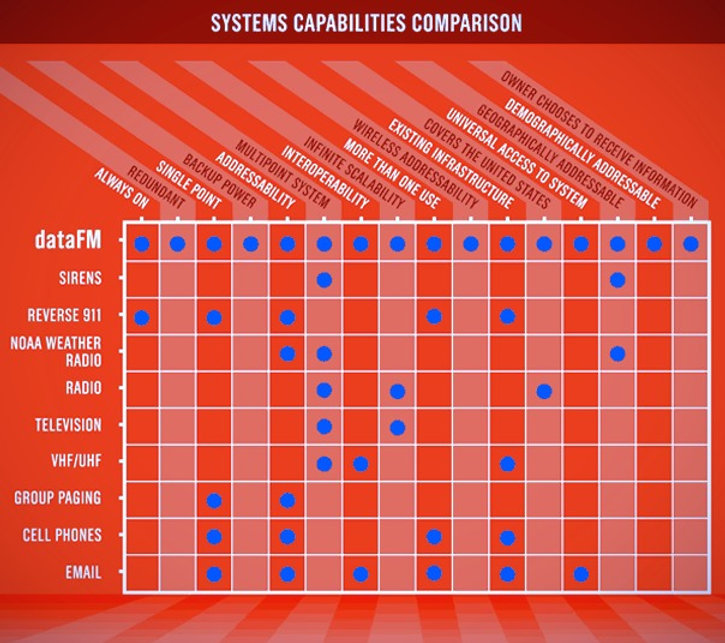 The Data FM system has scalability in pricing. There are individual receivers that can be installed in existing PCs, tablets, laptops or other computer devices at pricing below a standalone receiver. Standalone receivers are also available.

We have receivers that function for the disabled.   For the deaf it has a strobe light and for the blind it converts text to speech.

These systems are both wireless and wired. Wireless can communicate from either point to point or point to multipoint by way of the broadcast signal and the wired can respond from each receiver to the sender point to point.

The Data FM system has a multitude of advantages over cell phones.

The system works as follows:
A sender communicates over the internet, through police push to talk two-way radio or satellite to any number of FM transmitters. The FM transmitters broadcast to FM receivers that decode the data in the signal and display text and images on displays in the receivers. Once a receiver receives the message it reports back via an internet connection to the sender to confirm that the particular receiver received the message. This process can be done silently daily to confirm that all receivers are functional without human interaction. Thereby providing and confirming a reliable delivery of messages in the event of an emergency.